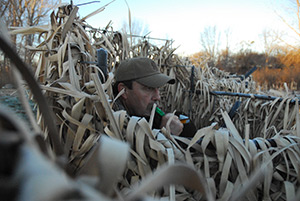 ALFALFA, Okla. – “Those ducks are dying to land,” Jack Brittingham joked as a trio of mallards eased down in the wetlands management unit just feet in front of us.

Had it not been nightfall and that we were watching the ducks pour into the millet-filled six acres of water, there was a good chance they would have died. At least the greenheads.

It had only been in the past week the big birds had moved onto the Crooked Creek Duck Club; the payoff for the first real cold front of the year that moved south through Oklahoma and Texas.

Brittingham, who lives near Bradford in Anderson County, has been sculpting Crooked Creek out of the farm and ranch country in western Oklahoma for the better part of the last decade. He started with about 30 acres of wetlands along the creek bottom and has added about 100 more to the chagrin of area duck hunters who have watched their hunting quality squeezed as more ducks winter inside Crooked Creek.

Located across the Washita Mountains from Lawton, the area isn’t what most think of when they think of Oklahoma. It is sparsely populated farm and ranch country similar to what is found from Wichita Falls to Childress directly to the south.

The attraction to the ducks is nearby Fort Cobb Reservoir that is three-quarters waterfowl refuge, and the area farming. It used to be peanut country. Just a few years ago farmers planted as much as 100,000 acres under production. Falling prices have seen that fall to about 10,000 acres in recent years.

“They used to say this area wintered about 100,000 geese and 70,000 ducks. I don’t think it is that many anymore,” said Brittingham, who grew up hunting waterfowl in places like Stuttgart’s timber and the marshes of the Texas Gulf Coast.

Brittingham wasn’t the first Texan to discover the area. It has long attracted Dallas-area hunters looking for more consistent mallard hunting than they could find in North Texas, and the bonus goose hunting. Even if Oklahoma isn’t short-stopping the big ducks as some hunters in Texas believe, hunters there do get first crack at them. They also get to hunt them for a longer period of time as it takes freezing ponds for the birds to continue coming south. Beyond building the wetlands components that are flooded with 12 to 18 inches of water, Brittingham and ranch manager Justin Mace have attacked waterfowl management like farmers. Each offseason the ponds are drained and planted with millet that produces yields comparable to surrounding farms. It helps make up for the declining peanut productions and provides a food source from the day the ducks begin to arrive in the fall until they leave.

At its peak Mace said the club’s ponds might hold as many as 8,000 ducks. A normal population on any given day could be a couple thousand, but with the approaching front he guessed as many as 6,000 were on the water.

Thanks to the warm early season, hunting had been tough leading up to the last weekend before the Oklahoma season took a two-week rest. The ducks, mostly mallards, road the high winds of the approaching front and flocked into the area.

Along with bringing in the ducks, Brittingham is convinced the dropping temperatures make the ducks more active feeders. That means they are going to be moving more and create better hunting.

On the first morning of a two-day hunt, six hunters left the lodge at daylight. It is one of several nuances at Crooked Creek. Probably odd to most duck hunters, it makes perfectly good sense to Brittingham who wants hunters to take mallard greenheads and not hens.

What may be even more surprising is that all hunting is limited to 28-gauge shotguns. While most waterfowlers use a 12-gauge, Brittingham has gone to the 28s in part because they are more sporting, but more importantly he is convinced they produce less noise and don’t disturb birds in other compartments. His point was proven on several occasions when hunters off-property shot big guns, causing ducks working our decoys to flare away at their shots.steve_2_small

“This shotgun doesn’t know it’s not a 12-gauge,” Brittingham said once after a duck shot at more than 30 yards dropped dead into the decoys.

Brittingham uses Hevi-Shot or Bismuth, both which are more fatal than the standard non-toxic shell. That comes at a price, however. Both sell for about $3 a shell, which can double the cost of shells for those who shoot well. It could be substantially more for those who don’t.

The first morning was a waterfowler’s nightmare – high blue sky and no wind. What was worse was that 500 ducks had decided to roost in the compartment just across the levy. No calling, no decoy set is going to beat that.

An admitted impatient hunter, Brittingham ordered everyone out of their blind and into the water to grab a dozen decoys and make a mad dash to the other compartment. Once there, he again surveyed the situation and the race was on back to first pond.

Eventually, the shooting became consistent, and as the morning went on the numbers began to add up. Eventually 30 green-head mallards were on six hunters’ stringers and the morning was over.

In contrast, the second morning’s hunt was ideal, thanks to a building breeze.

Multiple blind sets allow hunters to be shifted to different units daily depending on wind and what areas the ducks are utilizing that day. After an open setting the first morning, the hunting moved into the timber the second day. The decoys were set tight in front of the blinds. The farthest wasn’t 20 yards away. Hunters were still climbing in their blinds when the first shot went off and a wood duck hit the water. Within two hours, five limits of greenheads had been brought down and birds were still flying.