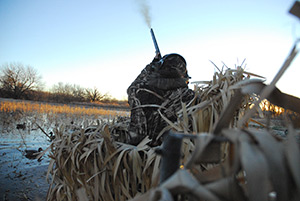 ALFALFA, Okla. – Banking hard off a stiff south wind that is shearing just above the treetops, flight after flight of mallard ducks circles over our heads, turns hard to the west for 100 yards and then reverses direction and to set their wings for the decoys bobbing 15 yards in front of the blinds.

Down here in the shadows, among the stark, leafless, Herman Munster cottonwoods that gird the flooded marsh pond, we hunker down in our parkas, watching the Top Gun flight maneuvers that guide the ducks back to us. Thumbs rest on safeties as we wait for the call.

Ducks — mostly the prized greenheads — are dropping almost straight down now, convinced that the little circle of decoys is a gathering of fellow ducks.

We can see the cupped wings with their blue epaulets and the bright orange feet that set mallards apart from other ducks. We can hear the constant chattering and low humming of the calls in the blinds and the enthusiastic responses from the real ducks.

With a faster pulse, old duck hunting tips pump out of the memory banks: use the bill of your cap for cover; never look directly at the ducks; don’t look up because your face shines; ignore the hens and focus on the drakes.

The ducks are almost on the water. I shift slightly in the blind, shoulder the gun, touch off a load of Hevi-Shot at the closest mallard drake and feel the glow of success as he drops with a satisfying splash. The rest of the flight hits the afterburners in retreat.

I turn back to my left, maybe for a little “good shot” pat on the back and see four faces glaring at me through the brown reeds of the blinds. “Did you hear anybody call the shot?” someone growls. Actually, I wasn’t sure, so focused had I been on that single mallard drake.

“I was going to let the first ones land so the rest of the ducks would come on in, and we’d all have a shot,” Jack Brittingham says. The words are clipped and a bit terse.

We are hunting at Brittingham’s Crooked Creek Duck Club, a 300-acre jewel of Oklahoma habitat that is north of Lawton and northwest of, literally, Nowhere. It features 130 acres of flooded marsh and feeding grounds that entertain thousands of traveling ducks each fall, most of them the mallards that serious hunters seek.

Shoulda said something, I say to myself.

While we wait for another flight, my fellow hunters ride me hard. The saving grace is that there are so many ducks in the area that they know they will get other opportunities. Finally I offer a weak olive branch: “OK, I won’t shoot at the next few groups of ducks.”

Brittingham has been hunting the Crooked Creek site for eight years, and, during the off season, he has had Justin Mace tend to the planting and tractor and trimming work that have made the area an oasis for waterfowl.

“The key is cold weather,” Brittingham says. “When it’s cold, 30 degrees or colder, it forces the ducks to feed, and they are going to be here. If it’s not cold, they’ll be here but they’ll just be sitting on the water and you can’t get them to fly.”

Brittingham only allows hunting on weekends and requires hunters use 28 gauge shotguns. He’s convinced that larger guns, 12s and 20s, create so much noise the ducks leave or avoid the area. We see some of that now. Several groups of ducks shy away from our spreads as hunters on a nearby ranch pound away with 12 gauges.

Crooked Creek also has a greenheads-only policy. Hunters can take 5 mallard drakes, plus one other type of duck — pintail, wood duck, teal, redhead. That’s a 6-bird per day limit. Although it’s legal to take up to two mallard hens as part of your daily bag, the hens are protected at Crooked Creek to help sustain the population. In two days of hunting, 6 hunters one day and 5 the next, we kill 11 limits of mallard drakes and feast on grilled breast fillets in the evening.

More ducks are coming and I’m faced with the first test of will on my pledge not to shoot. I’m also faced with almost the same situation as before. A flight of mallards drops in on the same flight line. Brittingham calls the shot.

Gunshots. I don’t move. One drake falls. Then another.

I’m still. A third duck drops well back in the trees, and a fourth hesitates, hanging right above me. It’s kind of a long shot for the little 28 gauge but a shot nonetheless. I take it, and the duck falls almost in the blinds.

Someone on the line recalls my plan not to shoot.